There’s a lot to think about when March rolls around – a snow thaw, spring break, tax season, summer around the corner. But one that at times gets overlooked is the most recognizable March festivity: Mardi Gras! This is the celebration of eating and drinking all the things that are bad for you before lent starts!  Not only is it a great opportunity to let loose, but this party provides a plethora of Booster Club Mardi Gras fundraiser ideas. Mardi Gras is the perfect spring kick off to your fundraising season that will intrigue your school community. 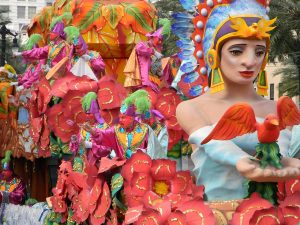 One of the elements of Mardi Gras that comes to most people’s minds are the multicolored plastic bead necklaces that are tossed into the air. They’re fun to catch, wear, and collect, each one telling an even bigger tale than the last. Next to a bake sale, selling these beads are one of the easiest booster club mardi gras fundraiser ideas you can set up.

Order your Mardi Gras beads in bulk, which is relatively simple to do. Amazon and Party City are each just one of many places to buy them. Prices and count vary depending on the company, but on most accounts, selling a necklace for as low a $1 a pop will guarantee you a sizeable profit. Traditional Mardi Gras beads are gold, green, and purple, but don’t be afraid to sell your school colors as well.

Have your booster club announce when, where, and how much they’ll be selling the beads for. Set up a booth during lunches and before/during games. If you or another booster club has a high energy event going on, consider selling them there. Plastic bead necklaces might not seem like much, but they’re a product that brings out the fun in everyone and certain to create a great booster club Mardi Gras fundraiser. 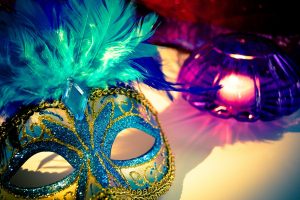 Like the beads, colorful masks are another big-ticket item found during Mardi Gras. Masquerade masks are usually meant to be dark and mysterious but the item is turned on its head for this celebration, complete with sparkles and feathers. Create your own masks by hosting a booster club mardi gras mask workshop.

This booster club fundraiser is a whimsical way to both raising money for your organization and lets your community members get in touch with their creative side. Set up a workshop space, a gym or cafeteria, with plain masquerade masks along with any and all appropriate craft decorations. Sequence, feathers, and lace are but a few possible options. Set up a photo booth or professional photo taker so that participates can show off their new accessory.

Be prepared to pre-make and sell masks for those who’d like one but would rather now make their own. 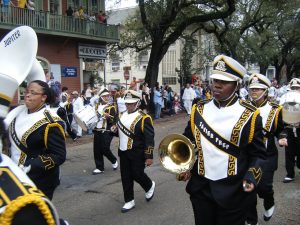 More than anything else, Mardi Gras is a party. People all over the country take part in the outlandish and exciting celebration that takes places in the masses. What better way to incorporate a booster club Mardi Gras fundraiser into your community than to host your very own booster club Mardi Gras fundraiser party? It might not be as grand and eccentric as the big cities’, which may or may not be a good thing, but can give your friends and school members a little piece of something special.

Little else matters more with a Mardi Gras dance party than the decor. Everything should be gold, green, and purple, whether it be balloons, streamers, feathers, or anything else you can come up with. Even the food if you’re really willing to go the extra mile. This is also where the previous two booster club fundraisers can tie in. Sell the beads and masks a few days to a week before the party is set to occur. This will allow you multiple chances to raise funds to support your cause. For a handful of tickets you sell, there’s a high chance that at least one of the group chose to also take part in the bead and/or mask sale. 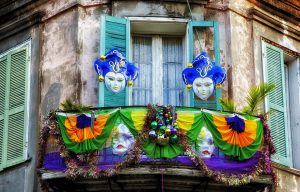 The dance party is fun for all ages, but it’s no secret that Mardi Gras has many aspects of the experience geared more towards parents. Consider having an parents only booster club Mardi Gras fundraiser where parents, school staff, and sponsors can have a fun night without the kids. Parents definitely need time off, and with a Mardi Gras theme, this soiree is bound to be a big hit with your booster club supporters.

Put together a night of music, adult beverages, and good food, whether this is at your school or in a separate location. Consider reserving an area at a restaurant or banquet hall if you’d like to plan something off school grounds, which might be required if not everything within the event is child-friendly. Keep in mind that this isn’t just a run of the mill dinner party. It can be a formal affair, if that’s what your crowd is looking for, but remember the casual feeling that Mardi Gras presents. You don’t have to get crazy, these are parents and staff after all, but it can still be a fun night on the town. 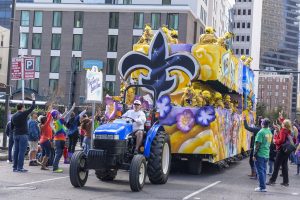 Have Your Own Mini Mardi Gras Fundraiser Parade

In many cities that celebrate Mardi Gras, the parade is the main event. Hundreds of people show up to watch the large, multicolored floats that carry even more colorful characters down the street. Put together your very own booster club Mardi Gras fundraiser parade with booster staff, community members, and fellow classmates being the guest of honors riding the floats.

If having your own booster club Mardi Gras fundraiser parade is something that sounds appealing, search for people or businesses that have trailers that they’re willing to lend to you for the occasion. Low-boy trailers and hay-trailers work best for stability and safety while giving you plenty of space to decorate. Make sure that for every float you plan on having has a vehicle and driver ready to pull it down a route of your choosing. The next part is the fun part – decorating. Of course, you’ll want to create a float that reflects your booster club, but it doesn’t end there. Consider “selling” a float to other clubs, businesses around town as advertisements, or individuals who want a parade spotlight. You’ll be raising funds while growing your current booster club fundraiser.

Making your audience purchase tickets might be a hard rule to enforce but have some volunteers walk around encouraging donations while others sell Mardi Gras theme merchandise and refreshments.

Don’t Let Your Booster Club Miss Out On Mardi Gras

Mardi Gras is a fun-filled celebration that not everyone will be able to experience in Louisiana or any other of the many other places like it that take part in the event. By making taking the well-known party and creating a themed fundraiser out of it, not only will you be able to present something new to your community, but you might just be able to transport of bit of that far off Mardi Gras party atmosphere to your booster club and community.

Mardi Gras not up your fundraising alley?  Check out some other great Winter Booster Club Fundraising ideas to help you meet your goals!

February 19, 2019 / by SelenaLundy / in Booster Club Fundraising
No comments yet