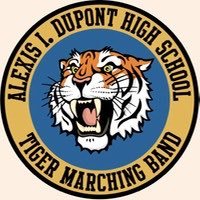 The TIGER MARCHING BAND hails from Alexis I. duPont High School in Wilmington, Delaware – a NEWSWEEK ‘Best American High School’ for nine of the last ten years.  One out of every eight students at A.I. is a member of the band!

The TIGERS made their first appearance at the Holiday Bowl Parade in San Diego, CA in 2014.  In 2006, 2010, and 2013 The TIGERS marched in the Fiesta Bowl Parade in Phoenix, Arizona. In 2007 and 2011, the band performed at the Vatican on New Year’s Day for his holiness, Pope Benedict, during his New Year’s Day address. On New Year’s Day, 2008, the TIGERS made their 5th appearance in the Pasadena Tournament of Roses Parade at the Rose Bowl – one of only 3 high school bands in the nation to be so honored at that time!

The TIGER MARCHING BAND is proud that 85% of it’s members are Varsity Athletes and 75% are on the Honor Roll.  The band is a student-led organization whose President is Leanne Townsend and Drum Major is Abbi Merritt.  An elected Student Executive Board makes all decisions regarding music, travel and activities. The TIGERS made their 8th appearance in London for the New Year’s Day Parade in 2017, the only high school band in America to be so honored.

In 2000, a CBS television commentator at the Miami Orange Bowl Parade called the Tigers the, “Mega-band from the mini-state.” We are proud to represent Delaware – the First State – wherever we travel.

To learn more about ALEXIS I DUPONT HIGH SCHOOL BAND BOOSTERS INC or to claim this profile page as yours – please register as a Booostr.com beta tester via the link in the upper right corner.